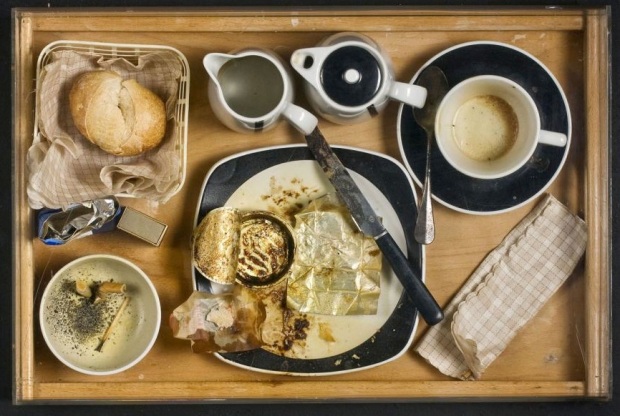 VARIANT D’UN PETIT DEJEUNER, 1965, DANIEL SPOERRI
OR – MY HOUSE ON ANY GIVEN MORNING OF THE WEEK

Malingering procrastination often has constructive results as evidenced by a partial clean-out of the kitchen over the last few days. Clutter experts suggest that the hearth of the home, that one room where we gather to prepare and give sustenance in the most human of gestures, is the best place to start when attempting to cut down down on the overwhelming amount of stuff we have collected for far too long. At least 9 hours, 7 drawers and three cupboards later, we disagree. The kitchen is the one place where it is actually the hardest to get rid of things – past the due-date salad seasonings and unidentifiable spice packets aside, there are a whole host of items passed down mother to mother (mostly for baking or prettily presenting) that have made several moves and still haven’t seen much action but are not finding their way into the get-rid-of pile without a fight. Madeleine pans for when we are feeling Proustian, glass pickle dishes with separations because Granny knew that condiments really are that cool, escargot plates – the last snail encountered was in the garden and now lives 4 doors down – will we ever use any of it? Miss Z won’t be having any of “that old crap” and laments the fact that the dinner plates and glasses have switched places “now that (she) just got her friends trained where everything was”. They are not the only ones who will be surprised… and we are not finished.

We often joke between ourselves that prolific artists probably had someone to take care of them, do the meaningless, trivial things of our waking hours like laundry, replacing the toilet paper roll or picking the dog-hair covered cheerio out of the hall carpet. This very stuff of life is, to a whole cadre of artists, material for their next project. Pop artists in the 1960s made it their mission to reimagine traditionally accepted subjects using radical techniques, to transform household objects and the commonplace into fine art. The master of making a complicated statement out of what might seem as simple as dishes on a table is Daniel Spoerri – one of the founders of the New Realist movement and creator of incredible snare-pictures, he proves that sometimes a group of random objects read in their entirety tell a larger, meaningful story.

One wonders what twisted plot is behind all that paraphernalia sitting on our kitchen counter.

8 thoughts on “F is for Friday: New Realism”